Home › Never Give Up Quotes 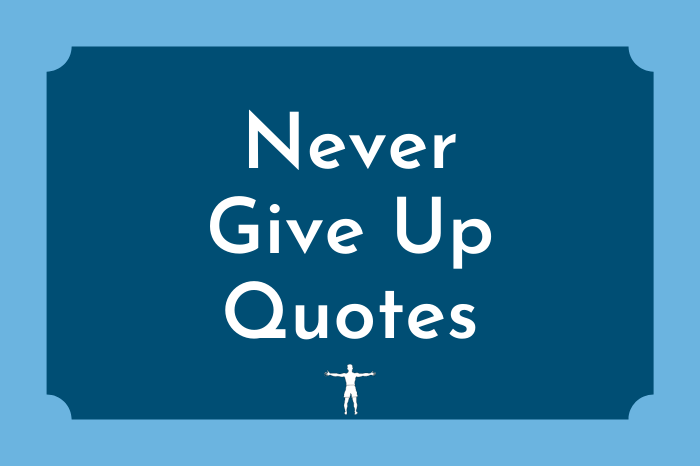 Giving up is always tempting in challenging situations, but these never give up quotes will strengthen your resolve to stick with it.

Sometimes we find ourselves facing so much adversity, we’d do anything to escape it. That may mean giving up on ourselves, our dreams, or even our principles.

However, one of the triumphs of life is choosing not to give up! Facing our challenges with determination and perseverance until we conquer them, and sometimes ourselves in the process.

In that spirit, here are the best never give up quotes to make you bold and resolute when you need to be.

Top 10 Never Give Up Quotes

Never give up. You only get one life. Go for it!

You never give up, even when you should.

Survival can be summed up in three words — never give up.

Never give up on something that you can’t go a day without thinking about.

I was taught the way of progress is neither swift nor easy.

Never give up trying to build the world you can see, even if others can’t see it.

It is never too late to be what you might have been.

More Never Give Up Quotes

Never give up your desire to be what you want to be. Stay focused, persistent and relentless.

Success seems to be largely a matter of hanging on after others have let go.

Never give up. There are always tough times, regardless of what you do in anything in life. Be able to push through those times and maintain your ultimate goal.

Never give up on a dream just because of the time it will take to accomplish it. The time will pass anyway.

Work hard, and never give up on your dreams, even when nobody else believes they can come true but you.

Positivity, confidence, and persistence are key in life, so never give up on yourself.

There is no failure except in no longer trying.

Go out into the world with your passion and love for what you do, and just never give up.

I actually learned that you should never give up, and if you love something, take courage and absolutely go after it.

Things aren’t always easy, but you just have to keep going and don’t let the small stuff bog you down.

Some people go through hard times, so bad that they can’t even talk about it, but no matter what, we should never give up.

Never quit believing that you can develop in life. Never give up. Don’t deny the inward spirit that provides the drive to accomplish great things in life.

You just never give up. You do a task to the best of your abilities and beyond.

Never give up on the fight until you win the belt.

Never give up on what you really want to do. The person with big dreams is more powerful than one with all the facts.

Never give up on what you really want to do. The person with big dreams is more powerful than the one with all the facts.

The secret of our success is that we never, never give up.

You may be the only person left who believes in you, but it’s enough. It takes just one star to pierce a universe of darkness. Never give up.

If you never give up, you’ll be successful.

Never give up. Laugh a lot. Be good to others.

Make it a quest to never give up even when the dots seem as if they are difficult to connect.

If you fall behind, run faster. Never give up, never surrender, and rise up against the odds.

When you get into a tight place and everything goes against you, till it seems as though you could not hang on a minute longer, never give up then, for that is just the place and time that the tide will turn.

I always try to do my best. Sometimes is that enough to get a good result, sometimes not, but I never give up, and I never will.

Never give up hope. All things are working for your good. One day, you’ll look back on everything you’ve been through and thank God for it.

Never give up, and be confident in what you do. There may be tough times, but the difficulties which you face will make you more determined to achieve your objectives and to win against all the odds.

I never give up, even when people tell me that I can’t do something. But if I believe I can, I really fight for it.

The reason I never give up hope is because everything is so basically hopeless.

God sees in you what you can’t see in yourself. Remember to keep the faith and never give up!

It’s okay to doubt yourself, it’s okay to feel down; just never give up.

Progressing at a snail’s pace is still progress, and slow progress is better than no progress. Never be stagnant, and never give up.

Never give up on things you’ve always dreamed of. Your dreams will become reality by your dedication and hard work.

We’ve all faced times when we’ve wanted to give up. Maybe we even did!

But these giving up quotes demonstrate that not giving up is more rewarding and a key part of self-belief and character.

The only thing you should ever quit is giving up!

Our greatest weakness lies in giving up. The most certain way to succeed is always to try just one more time.

Giving up is the only sure way to fail.

Many of life’s failures are people who did not realize how close they were to success when they gave up.

You can’t quit or give up before you get it!

Circumstances don’t defeat you — you defeat yourself when you give up.

Strength does not come from winning. Your struggles develop your strengths. When you go through hardships and decide not to surrender, that is true strength.

Never give in or give up, but do grow up!

Believe me, the hardest thing for a man to give up is that which he really doesn’t want, after all.

Don’t allow your mind to tell your heart what to do. The mind gives up easily.

Adhere to your purpose and you will soon feel as well as you ever did. On the contrary, if you falter, and give up, you will lose the power of keeping any resolution, and will regret it all your life.

When you feel like giving up, remember why you held on for so long in the first place.

If you get tired, learn to rest, not to quit.

Give up trying to make me give up.

Nothing could be worse than the fear that one had given up too soon, and left one unexpended effort that might have saved the world.

Giving up is conceding that things will never get better, and that is just not true.

Giving back involves a certain amount of giving up.

Being defeated is often a temporary condition. Giving up is what makes it permanent.

The moment when you feel like giving up is right before your breakthrough.

I gave up coffee. It’s almost worse than giving up a lover.

You gain nothing from giving up.

I’ve just never liked giving up on anything.

Quotes about Not Giving Up

It’s not that I’m so smart, it’s just that I stay with problems longer.

Most of the important things in the world have been accomplished by people who have kept on trying when there seemed to be no hope at all.

When someone tells you that you can’t do something, perhaps you should consider that they are only telling you what they can’t do.

Anyone can start something. No one quits right before the prize. The middle sets people apart.

It’s probably my job to tell you life isn’t fair, but I figure you already know that. So instead, I’ll tell you that hope is precious, and you’re right not to give up.

If you don’t give up, you still have a chance. Giving up is the greatest failure.

How long should you try? Until.

Either do not begin or, having begun, do not give up.

If you are going through hell, keep going.

A winner is just a loser who tried one more time.

Courage doesn’t always roar. Sometimes it’s the quiet voice at the end of the day whispering, ‘I will try again tomorrow.’

Character consists of what you do on the third and fourth tries.

The only thing that will stop you from fulfilling your dreams is you.

Successful men and women keep moving. They make mistakes, but they don’t quit.

You may have to fight a battle more than once to win it.

Don’t give up. There are too many nay-sayers out there who will try to discourage you. Don’t listen to them. The only one who can make you give up is yourself.

When you get to the end of your rope, tie a knot and hang on.

There is no substitute for hard work. Never give up. Never stop believing. Never stop fighting.

If you don’t give up on something you truly believe in, you will find a way.

Effort only fully releases its rewards after a person refuses to quit.

Believe in yourself and all that you are, know that there is something inside you that is greater than any obstacle.

A little more persistence, a little more effort, and what seemed hopeless failure may turn to glorious success.

You do what you can for as long as you can, and when you finally can’t, you do the next best thing. You back up but you don’t give up.

But when we find that one person who completes us, we don’t give up. No matter how bad we screw up. We make it right.

Never give up. Never give in. Never become hostile… Hate is too big a burden to bear.

You are planting seeds now and one day when you least expect those flowers will bloom. Trust the process.

We hope these never give up quotes give you the resolve to stick with your task, no matter what it is.

No life is without challenges, but it’s how we face them that counts. Choose to face yours with the mindset these quotes about not giving up demonstrate and gain the resolve you need.

When you consciously decide not to give up, you’re one step closer to being stronger and turning obstacles into opportunities.