Home › Coffee Quotes to Perk You Up 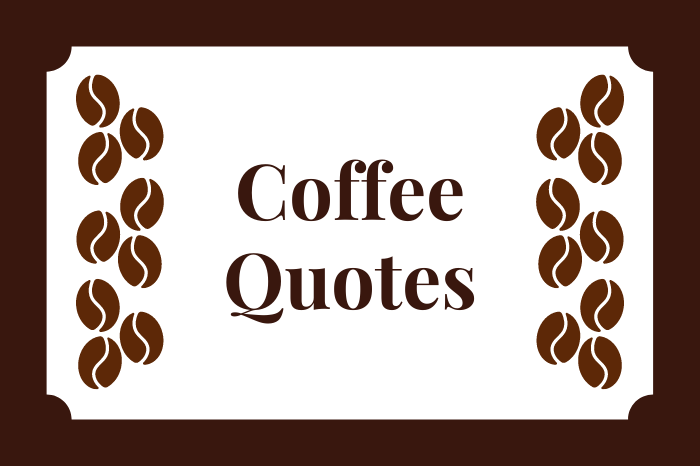 Need a little pick-me-up? These coffee quotes will give you a boost and help you enjoy your next cup even more.

The coffee scene is thriving right now and there’s no doubt it brings people together. Whether we’re on the go or relaxing in our favorite cafe, a good cup of java is a great way to get started or keep going!

So grab a cup and enjoy these coffee quotes to celebrate its place in culture and daily life.

Coffee, the favorite drink of the civilized world.

Coffee is the best thing to douse the sunrise with.

I never laugh until I’ve had my coffee.

Coffee is a beverage that puts one to sleep when not drank.

I orchestrate my mornings to the tune of coffee.

Coffee is a kind of magic you can drink.

Even bad coffee is better than no coffee at all.

What goes best with a cup of coffee? Another cup.

Once you wake up and smell the coffee, it’s hard to go back to sleep.

I judge a restaurant by the bread and by the coffee.

I have measured out my life with coffee spoons.

I think the key to the start of any good relationship is to remember how the other person likes their coffee.

J. Lynn, Wait for You

I would rather suffer with coffee than be senseless.

I was taken by the power that savoring a simple cup of coffee can have to connect people and create community.

The morning cup of coffee has an exhilaration about it which the cheering influence of the afternoon or evening cup of tea cannot be expected to reproduce.

Coffee doesn’t need a menu, it needs a cup. That’s all it needs! Maybe a saucer underneath the cup — that’s it.

Ah coffee. The sweet balm by which we shall accomplish today’s tasks.

It’s amazing how the world begins to change through the eyes of a cup of coffee.

To me, the smell of fresh-made coffee is one of the greatest inventions.

As long as there was coffee in the world, how bad could things be?

Coffee connects us in so many ways – to each other, to our senses, and to the earth that supports the coffee trees.

I’ll read my books and I’ll drink coffee and I’ll listen to music, and I’ll bolt the door.

What on earth could be more luxurious than a sofa, a book, and a cup of coffee?

I’d never met coffee that wasn’t wonderful. It was just a matter of how wonderful it was.

I don’t know how people live without coffee, I really don’t.

The powers of a man’s mind are directly proportioned to the quantity of coffee he drinks.

Coffee is a way of stealing time that should by rights belong to your older self.

A morning coffee is my favorite way of starting the day, settling the nerves so that they don’t later fray.

Coffee is a fleeting moment and a fragrance.

Coffee makes us severe, and grave, and philosophical.

I like my coffee with cream and my literature with optimism.

It’s when you look over the top of your coffee cup, that you can smile at life.

You can’t have a decent food culture without a decent coffee culture: the two things grow up together.

Espresso is to Italy what champagne is to France.

Good communication is just as stimulating as black coffee, and just as hard to sleep after.

I was taken by the power that savoring a simple cup of coffee can have to connect people and create community.

I force people to have coffee with me, just because I don’t trust that a friendship can be maintained without any other senses besides a computer or cellphone screen.

When we drink coffee, ideas march in like the army.

Adventure in life is good… consistency in coffee even better.

Science may never come up with a better office communication system than the coffee break.

Coffee should be black as hell, strong as death, and sweet as love.

Three hundred years ago, during the Age of Enlightenment, the coffee house became the center of innovation.

I never drink coffee at lunch. I find it keeps me awake for the afternoon.

If it wasn’t for coffee, I’d have no discernible personality at all.

Television is not real life. In real life, people actually have to leave the coffee shop and go to jobs.

No matter what historians claimed, BC really stood for ‘Before Coffee.’

Cherise Sinclair, Master of the Mountain

Without my morning coffee, I’m just like a dried-up piece of goat.

My couch is coffee-colored. I can thank Starbucks and clumsiness for that.

We want to do a lot of stuff. We’re not in great shape. We didn’t get a good night’s sleep. We’re a little depressed. Coffee solves all these problems in one delightful little cup.

It is inhumane, in my opinion, to force people who have a genuine medical need for coffee to wait in line behind people who apparently view it as some kind of recreational activity.

Behind every successful woman is a substantial amount of coffee.

I believe humans get a lot done, not because we’re smart, but because we have thumbs so we can make coffee.

Why, yes, I could start my day without coffee. But I like being able to remember things like how to say words and put on pants.

A mathematician is a device for turning coffee into theorems.

Our culture runs on coffee and gasoline, the first often tasting like the second.

I put instant coffee in a microwave oven and almost went back in time.

Decaf coffee only works if you throw it at people.

Life’s too short for bad coffee.

Decaffeinated coffee is kind of like kissing your sister.

We hope these coffee quotes gave you a boost and a newfound appreciation for coffee.

No matter where you enjoy the bean scene, we hope you appreciate your next cup a little more.