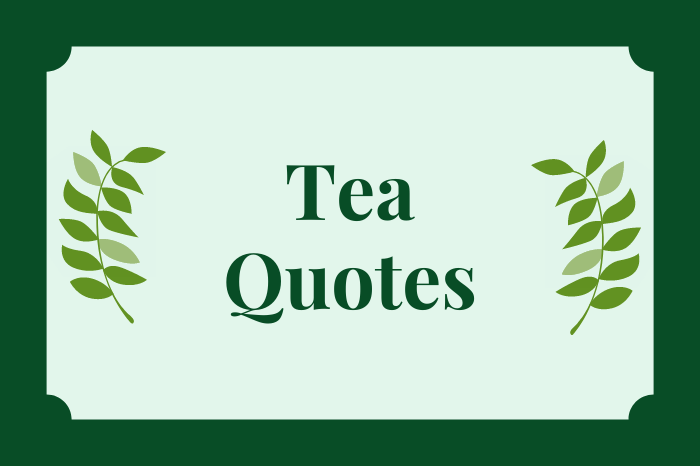 Tea has been part of life for thousands of years. These tea quotes will help you make it part of yours.

After originating in China, tea traveled the world and steeped into cultures in almost every continent. Tea leaves have crossed land and sea with explorers, armies, poets, and diplomats.

Whether you’re sipping the hot and comforting liquid at a formal afternoon service, or just relaxing with a book, get ready to celebrate tea’s important place in many cultures around the world.

So begin brewing, start steeping, and enjoy these tea quotes with your next cuppa.

Tea will take you there.

A simple cup of tea is far from a simple matter.

Each cup of tea represents an imaginary voyage.

Tea is the magic key to the vault where my brain is kept.

Tea is the elixir of life.

A cup of tea would restore my normality.

If at first, you don’t succeed, have a cup of tea.

Tea – the cups that cheer but not inebriate.

Tea to the English is really a picnic indoors.

Tea, though ridiculed by those who are naturally coarse in their nervous sensibilities will always be the favorite beverage of the intellectual.

Tea is balm for the soul, don’t you agree?

When you are drinking tea, it is basically a private conversation between the tea and your individual soul.

But indeed I would rather have nothing but tea.

Coffee isn’t my cup of tea.

There is no trouble so great or grave that cannot be diminished by a nice cup of tea.

Drinking a daily cup of tea will surely starve the apothecary.

All true tea lovers not only like their tea strong but like it a little stronger with each year that passes.

Making tea is a ritual that stops the world from falling in on you.

You can never get a cup of tea large enough or a book long enough to suit me.

Tea cannot be learned from a book, only from the heart.

Some people will tell you there is a great deal of poetry and fine sentiment in a chest of tea.

Rainy days should be spent at home with a cup of tea and a good book.

Tea is a part of daily life. It is as simple as eating when hungry and drinking when thirsty.

Great love affairs start with champagne and end with tisane.

Tea does our fancy aid, Repress those vapours which the head invade, And keeps that palace of the soul serene.

The Chinese say it’s better to be deprived of food for three days than tea for one.

No matter where you are in the world, you are at home when tea is served.

The spirit of the tea beverage is one of peace, comfort and refinement.

It has been well said that tea is suggestive of a thousand wants, from which spring the decencies and luxuries of civilization.

There is something in the nature of tea that leads us into a world of quiet contemplation of life.

There is no problem on earth that can’t be ameliorated by a hot bath and a cup of tea.

Water is the mother of tea, a teapot its father, and fire the teacher.

Tea is best when enjoyed in pleasant surroundings, whether indoors or out, where the atmosphere is tranquil, the setting harmonious.

If you ask Zen people they will say tea is not something that you pour with unawareness and drink like any other drink. It is not a drink, it is meditation; it is prayer. So they listen to the kettle creating a melody, and in that listening they become more silent, more alert.

Do not gulp the tea but sip it slowly allowing its fragrance to fill your mouth. There is no need to have any special attitude while drinking except one of thankfulness.

I say let the world go to hell, but I should always have my tea.

Tea is the magic key to the vault where my brain is kept.

Tea is quiet and our thirst for tea is never far from our craving for beauty.

Wouldn’t it be dreadful to live in a country where they didn’t have tea?

A cup of tea is an excuse to share great thoughts with great minds.

If a man has no tea in him, he is incapable of understanding truth and beauty.

Ecstasy is a glass full of tea and a piece of sugar in the mouth.

There are few hours in life more agreeable than the hour dedicated to the ceremony known as afternoon tea.

The very act of preparing and serving tea encourages conversation. The little spaces in time created by teatime rituals call out to be filled with conversation. Even the tea itself–warm and comforting–inspires a feeling of relaxation and trust that fosters shared confidences.

Tea time is a chance to slow down, pull back and appreciate our surroundings.

I always fear that creation will expire before teatime.

I got nasty habits – I take tea at three.

You have arrived at a propitious moment, coincident with your country’s one indisputable contribution to Western Civilization: Afternoon tea

Tea brings time to a crawl, its frantic pace resuming on noticing our empty cups.

When tea becomes ritual, it takes place at the heart of our ability to see greatness in small things.

Come along inside… We’ll see if tea and buns can make the world a better place.

Tea is one of the mainstays of civilization in this country.

The ‘art of tea’ is a spiritual force for us to share.

In nothing more is the English genius for domesticity more notably declared than in the institution of this festival-almost one may call it-of afternoon tea…the mere chink of cups and saucers tunes the mind to happy repose.

When tea becomes ritual, it takes its place at the heart of our ability to see greatness in small things.

We hope you enjoyed these tea quotes and gained a new appreciation on tea’s huge place in history.

From world-famous hot tea in winter to iced tea on a summer day, enjoy this delightful drink any time of year and in nearly any country!