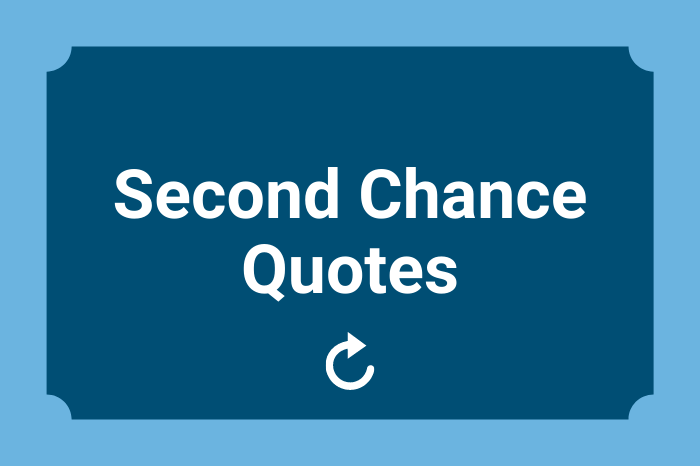 Unfortunately, we don’t always get things right the first time we try them. Whether it’s a relationship, a new skill, a work assignment, or any other kind of task, we often wish we could try it again.

Sometimes we try our best and want to do better. Other times we may make mistakes, poor decisions, or get unlucky. It’s these times when second chances give us an opportunity to redeem ourselves.

We may also be faced with the option to give someone else a second chance, even if we risk them messing up again. Whichever side you’re on, these second chance quotes are the place to start.

Having a second chance makes you want to work even harder.

A man deserves a second chance, but keep an eye on him.

A second chance doesn’t mean anything if you didn’t learn from your first.

I’ve learned that life always offers us a second chance to prove yourself.

We all make mistakes, everybody should be given a second chance.

If you are still breathing, you have a second chance.

We do not get redos, but we do get second chances.

Sometimes life gives you a second chance, or even two! Not always, but sometimes.

There are few things as powerful as the joy of someone who got a second chance and found their purpose.

You are not always given a second chance and there are no guarantees.

Never be afraid to start over, it’s a new chance to rebuild what you want. You’re fortunate if you’re given a second chance.

I want the world to know that everybody deserves a second chance.

We all have big changes in our lives that are more or less a second chance.

To take that second chance, we need to notice where we are and be open to the possibility of growing.

There’s nothing as exciting as a comeback – seeing someone with dreams, watching them fail, and then getting a second chance.

If you ever get a second chance in life for something, you’ve got to go all the way.

If somebody is gracious enough to give me a second chance, I won’t need a third.

Let tomorrow be your second chance to prove that you are better than today and yesterday.

Every second a seeker can start over, for his life’s mistakes are initial drafts and not the final version.

Basically, a second chance is a “do over,” an opportunity to make an additional effort at accomplishing something or reaching a goal after you’ve failed at least once.

A second chance doesn’t mean you’re in the clear. In many ways, it is the more difficult thing. Because a second chance means that you have to try harder. You must rise to the challenge without the blind optimism of ignorance.

Easter is very important to me, it’s a second chance.

This has been my life. I have found it worth living, and would gladly live it again if the second chance were offered me.

All discarded lovers should be given a second chance, but with somebody else.

When God gives you a second chance, it’s not something you take for granted.

One of the things I believe in most strongly is the power of a second chance.

Every second we have a second chance to do something we haven’t done yet. That’s why it’s called a second and not a first.

Thank God you are still alive for many have died and are dying as I speak. You still have the opportunity to change and make things right whilst those that have died wish for that second chance.

Opportunities multiply as they are seized.

Sun Tzu, The Art of War

They say everyone needs a second chance. I am willing to give you one provided you are ready to accept it.

Her life was her major disappointment, her mistakes carved into every premature line in her face, but I wasn’t going to let her use my life as her second chance.

No one can claim perfection, that’s why everyone needs a second chance ad infinitum.

Children are our second chance to have a great parent-child relationship.

People do make mistakes and I think they should be punished. But they should be forgiven and given the opportunity for a second chance. We are human beings.

If you fail today there is always tomorrow to try again. You always have that second chance tomorrow.

Sometimes goodbye is a second chance.

I can’t tell whether a revived man would appreciate his second chance or yearn for the stolen serenity.

There is no going back in life, no return, no second chance. I cannot call back the spoken word or the accomplished deed.

We all deserve second chances, but not for the same mistake.

Because this is what I believe – that second chances are stronger than secrets. You can let secrets go. But a second chance? You don’t let that pass you by.

Second chances do come your way. Like trains, they arrive and depart regularly. Recognizing the ones that matter is the trick.

We can’t run out of second chances…only time.

Nothing erases the past. There is repentance, there is atonement, and there is forgiveness. That is all, but that is enough.

I will forever believe in second chances and forgiveness, because if it weren’t for those two things I would and should be dead.

We all deserve second chances, but not for the same mistake.

Sometimes there is no next time, no time-outs, no second chances. Sometimes it’s now or never.

I believe in second chances, but I don’t believe in third or fourth chances.

Take chances, make mistakes. That’s how you grow. Pain nourishes your courage. You have to fail in order to practice being brave.

But second chances aren’t forever. Even miracles have an expiration date.

Maybe that’s why there are grandkids, a second chance to get it right.

Tomorrow when I awaken, the slate will be clean, and a new day will stretch before me.

We’re given second chances every day of our life. We don’t usually take them, but they’re there for the taking.

There’s a crack in everything.  That’s how the light gets in.

I check my pulse and if I can find it, I know I’ve got a chance.

If you make mistakes, even serious ones, there is always another chance for you. What we call failure is not the falling down but the staying down.

Whatever problems we had back then don’t exist anymore. It’s why we have this one more chance, and we can’t throw it away.

When you are on your last straw, that means you have one more opportunity, use it to not give up doing good.

Don’t be afraid to explore life. We are given one chance to enjoy all there is. Make your stay worthy of that one chance.

If there’s even a slight chance at getting something that will make you happy, risk it. Life’s too short and happiness is too rare.

Chance is not a word to toss in the air. It’s a word to take in, a word to give yourself.

Everyone has a past. I have mine, you have yours, and we have ours. No matter what it takes, I will prove to you that our past, no matter how hurtful, didn’t ruin the future we could have.

I hate New Year’s Eve. One more chance to remember that you haven’t yet done what you wanted. And to pretend it doesn’t matter.

It’s about second chances, Neil. Second, third, fourth, whatever, as long as you get at least one more than what anyone else wanted to give you.

You clutch your comfortable excuses, saying, Someday I’ll be brave, it won’t take a lot, just give me one more chance and this time I’ll grab it.

In the space between chaos and shape, there was another chance.

Nobody owes anybody a living, but everybody is entitled to a chance.

You get as many chances as you want; as many as you dare to make for yourself.

We never really learn from the first mistake or the second or third. It only hits us when we’re given the last chance.

Childhood is Last Chance Gulch for happiness. After that, you know too much.

Cats are our last best chance to have a dysfunctional relationship.

The oceans are the planet’s last great living wilderness, man’s only remaining frontier on earth, and perhaps his last chance to produce himself a rational species.

Marriage is our last, best chance to grow up.

Life ends so fast, so take your chance, and make it last.

We still have a choice today: nonviolent coexistence or violent co-annihilation. This may well be mankind’s last chance to choose between chaos and community.

The chance which now seems lost may present itself at the last moment.

In front of him stood the woman of his dreams, giving him one last chance to kiss her. Reason didn’t stand a chance.

If they say ‘you have your last chance to look at the world,’ I wish that look would be from Çamlıca of Istanbul.

Look, I want to love this world as though it’s the last chance I’m ever going to get to be alive and know it.

Don’t give up. Normally it is the last key on the ring that opens the door.

Now is our chance to choose the right side. God is holding back to give us that chance. It won’t last forever. We must take it or leave it.

The way I see it, you have to take every chance you get because there may not be another one.

You shouldn’t miss opportunities to live life. It could always be your last chance.

Did these second chance leave you ready to seek another opportunity to get something right?

Redemption isn’t always a religious concept. We often desire to redeem ourselves to others by getting second chances and correcting our mistakes, or having the grace to give others second chances, too.

So whether you need to do something better, get something back, or try again, our second chance quotes show it’s never too late to try. And don’t be afraid to afford the same opportunity to others who may need it too.