Home › Quotes About Being Yourself 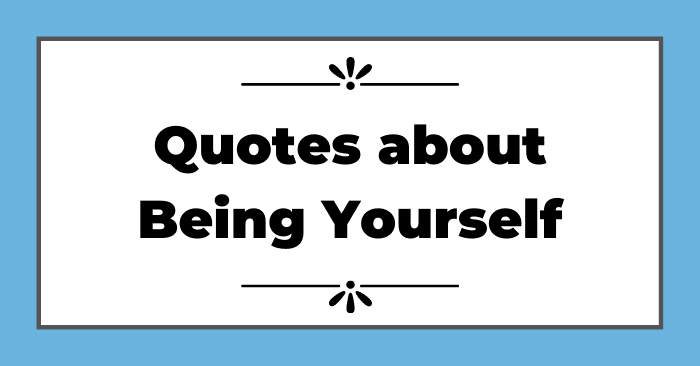 These quotes about being yourself will help you determine your own identity and live the life you want for yourself.

How many times each day do you mean to say one thing, and say another instead, because you’re worried about what others might think?

How often do you wake up in the morning with one idea in mind for what you want to accomplish, only to find yourself doing something else because of social pressures or personal anxieties?

No lifetime, no matter how successful, will be truly rewarding or happy if you cannot learn to love yourself and be yourself.

It may seem hard, but great people throughout history who have struggled to find their identities, too. Just as they rose to the challenge, you too can learn how to be yourself.

Be yourself, don’t take anything from anyone, and never let them take you alive.

You’ve got to be yourself, and if you’re not, you’re a phony. It comes shining through if you’re not careful.

Be who you are and say what you feel, because those who mind don’t matter, and those who matter don’t mind.

To be yourself in a world that is constantly trying to make you something else is the greatest accomplishment.

You may not control all the events that happen to you, but you can decide not to be reduced by them.

You cannot change what you are, only what you do.

You are you. Now, isn’t that pleasant?

I will not let anyone walk through my mind with their dirty feet.

To be nobody but yourself in a world which is doing its best, night and day, to make you everybody else means to fight the hardest battle which any human being can fight; and never stop fighting.

God has given you one face, and you make yourself another.

The individual has always had to struggle to keep from being overwhelmed by the tribe. If you try it, you will be lonely often, and sometimes frightened. But no price is too high to pay for the privilege of owning yourself.

Where’s your will to be weird?

If you cannot be a poet, be the poem.

Most people are other people. Their thoughts are someone else’s opinions, their lives a mimicry, their passions a quotation.

I find the best way to love someone is not to change them, but instead, help them reveal the greatest version of themselves.

There is nothing more awful, insulting, and depressing than banality.

I will not hide my tastes or aversions. I will so trust that what is deep is holy, that I will do strongly before the sun and moon whatever only rejoices me, and the heart appoints.

Hateful to me as the gates of Hades is that man who hides one thing in his heart and speaks another.

If you can’t love yourself, how in the hell you gonna love somebody else?

They can’t scare me if I scare them first.

Find out who you are and do it on purpose.

Don’t be into trends. Don’t make fashion own you, but you decide what you are, what you want to express by the way you dress and the way to live.

An unfulfilled vocation drains the color from a man’s entire existence.

Imperfection is beauty, madness is genius and it’s better to be absolutely ridiculous than absolutely boring.

Don’t let others box you into their idea of what they think you should be. A confined identity is a miserable way to exist. Be you and live free. Trust that in living true to yourself, you will attract people that support and love you, just as you are.

To be one, to be united is a great thing. But to respect the right to be different is maybe even greater.

If you want to be yourself, sometimes you can’t compare the economic benefit with art.

Learn to be what you are, and learn to resign with a good grace all that you are not.

One’s real life is often the life that one does not lead.

We all wear masks, and the time comes when we cannot remove them without removing some of our own skin.

It is better to be hated for what you are than to be loved for something you are not.

Taking into account the public’s regrettable lack of taste, it is incumbent upon you not to fit in.

Some people say you are going the wrong way, when it’s simply a way of your own.

Follow your heart, listen to your inner voice, stop caring about what others think.

Roy T. Bennett, The Light in the Heart

To shine your brightest light is to be who you truly are.

I think the reward for conformity is that everyone likes you except yourself.

Always be yourself, express yourself, have faith in yourself, do not go out and look for a successful personality and duplicate it.

You just have to be yourself and go full with confidence and be courageous.

If you can just be yourself, then you have to be original because there’s no one like you.

It sounds so simple, but if you just be yourself, you’re different than anyone else.

To be beautiful means to be yourself. You don’t need to be accepted by others. You need to accept yourself.

Be yourself is about the worst advice you can give to some people.

Don’t worry about what the people say; be yourself, say what you want to say with respect.

The secret to success is to be yourself.

When you are content to be simply yourself and don’t compare or compete, everyone will respect you.

Accept no one’s definition of your life, but define yourself.

Never complain, never explain. Resist the temptation to defend yourself or make excuses.

Never apologize for being yourself.

Our time is limited, so don’t waste it living someone else’s life.

You must not be afraid of your uniqueness and you must care less and less what people think of you.

No one ever made a difference by being like everyone else.

When someone is properly grounded in life, they shouldn’t have to look outside themselves for approval.

Don’t believe you have to be like anybody to be somebody.

Don’t let other people decide who you are.

You change the world by being yourself.

Don’t chase people. Be yourself, do your own thing and work hard. The right people – the ones who really belong in your life – will come to you, and stay.

When you see a mob doing something, it should make you less likely to do it yourself, not more likely.

You, being yourself, unknowingly inspire others to be themselves.

The imitator dooms himself to hopeless mediocrity.

Large groups are no place for smart people.

The most courageous act is still to think for yourself. Aloud.

Conformity is the jailer of freedom and the enemy of growth.

I pay no attention whatever to anybody’s praise or blame. I simply follow my own feelings.

Do not fear to be eccentric in opinion, for every opinion now accepted was once eccentric.

This above all: to thine own self be true.

At bottom every man knows well enough that he is a unique being, only once on this earth; and by no extraordinary chance will such a marvelously picturesque piece of diversity in unity as he is, ever be put together a second time.

They laugh at me because I’m different; I laugh at them because they’re all the same.

I would rather die having spoken in my manner, than speak in your manner and live.

It takes courage to grow up and become who you really are.

Appear as you are, be as you appear.

I am not what happened to me, I am what I choose to become.

You want to be uncommon amongst uncommon people. Period.

The most contrarian thing of all is not to oppose the crowd but to think for yourself.

Only dead fish go with the flow.

A friend is someone who gives you total freedom to be yourself-and especially to feel, or not feel. Whatever you happen to be feeling at any moment is fine with them. That’s what real love amounts to – letting a person be what he really is.

Don’t dilute yourself for any person or any reason. You are enough! Be unapologetically you.

It’s hard to be a diamond in a rhinestone world.

Consult your conscience; rather than popular opinion.

Within you, there is a stillness and a sanctuary to which you can retreat at anytime and be yourself.

Don’t try to impress people. Always be yourself.

We hope that these quotes about being yourself have inspired to take your own path.

It’s not always easy to be yourself, but part of that stems from learning to love and respect yourself as you are. These sayings remind us that others have faced that struggle with their self esteem and the judgment of others and won!

15 thoughts on “Quotes About Being Yourself”