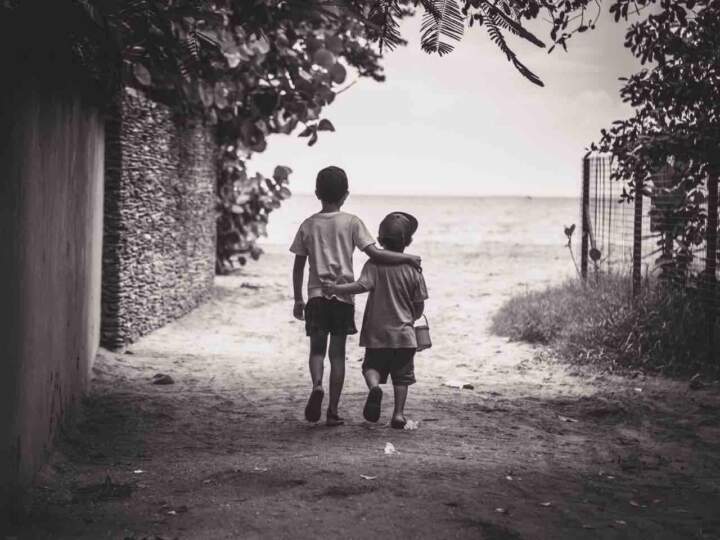 When you were growing up, did your brother greet you with a black eye or a hug?

Did you spend your days roughhousing, playing outside, or competing with one another to win the top score on your latest console game?

However you spent your childhood together, your brother – whether he was older or younger than you – probably had one of the most important roles in shaping who you are today.

But brothers don’t have to be blood relations. Maybe those you see as your “brothers” aren’t even men who grew up in the same household or neighborhood as you did.

They are just incredible friends you met later in life – at college, in your workplace, or through a hobby you enjoy – who have always been there for you.

What defines a brother like this is that they are reliable and trustworthy in all circumstances.

To celebrate the brotherly bond, we’ve put together a list of the very best brother quotes out there. These quotes come from authors, thinkers, and celebrities who have shared their feelings about their own siblings.

Our hope is that, when you read these quotes about brothers, you might find quite a few that remind you of your own brother or brothers.

Many of these timeless sayings also recognize the concept of a higher brotherhood that unites all of humanity.

Brotherhood as a larger concept means finding it in your heart to truly care about your fellow human beings, and allowing them to lift you up as well when you need it.

A brother is someone you can depend on, and who you will do anything for.

Read on to enjoy these inspirational quotes about brotherhood!

There is a little boy inside the man who is my brother… Oh, how I hated that little boy. And how I love him too.

I don’t believe an accident of birth makes people sisters or brothers. It makes them siblings, gives them mutuality of parentage. Sisterhood and brotherhood is a condition people have to work at.

Never make a companion equal to a brother.

It was nice growing up with someone like you – someone to lean on, someone to count on… someone to tell on!

Mum used to say we were the same soul split in two and walking around on four legs. It seems unnatural being born together and then dying apart.

She had always wanted a brother. And she had one now. Sebastian. It was like always wanting a puppy and being a hellhound instead.

The younger brother must help to pay for the pleasures of the elder.

The highlight of my childhood was making my brother laugh so hard that food came out his nose.

My sister was drowning in the ocean once, and my brother and I dove in and saved her. True story. She owes us her life. It’s great leverage; we abuse it all the time!

I grew up with a younger brother, so I can get pretty rowdy.

We have flown the air like birds and swum the sea like fishes, but have yet to learn the simple act of walking the earth like brothers.

Our brothers and sisters are there with us from the dawn of our personal stories to the inevitable dusk.

Help your brother’s boat across, and your own will reach the shore.

There is a destiny which makes us brothers; none goes his way alone. All that we send into the lives of others comes back into our own.

Brothers don’t necessarily have to say anything to each other – they can sit in a room and be together and just be completely comfortable with each other.

The best way to get a puppy is to beg for a baby brother – and they’ll settle for a puppy every time.

My father used to play with my brother and me in the yard. Mother would come out and say, ‘You’re tearing up the grass.'” ‘We’re not raising grass,’ Dad would reply. ‘We’re raising boys.’

One can be a brother only in something. Where there is no tie that binds men, men are not united but merely lined up.

When I look at each of my brothers, I see two things. First, I see the next place I want to leave a rosy welt. Second, I see a good man who will always be there, no matter how hard life gets for me or him. Then, I get out of the way because I realize he’s coming at me with a wet dish towel.

Nothing can stop me from loving my brother.

I grew up with six brothers. That’s how I learned to dance – waiting for the bathroom.

All men were made by the Great Spirit Chief. They are all brothers.

If you want to know how your girl will treat you after marriage, just listen to her talking to her little brother.

To the outside world we all grow old. But not to brothers and sisters. We know each other as we always were. We know each other’s hearts. We share private family jokes. We remember family feuds and secrets, family griefs and joys. We live outside the touch of time.

It snowed last year too: I made a snowman and my brother knocked it down and I knocked my brother down and then we had tea.

A sibling may be the keeper of one’s identity, the only person with the keys to one’s unfettered, more fundamental self.

Being pretty on the inside means you don’t hit your brother and you eat all your peas – that’s what my grandma taught me.

I was a tomboy and I didn’t have a bunch of brothers but I always wanted them and so I sort of adopted a few of my great friends to be my brother.

I hated Chris, my brother. I would pull his hair and kick him, until one day my father gave him permission to fight back. I’ll be apologizing to him for the rest of my life.

My father wants me to be like my brother, but I can’t be.

If you have a brother or sister, tell them you love them every day – that’s the most beautiful thing. I told my sister how much I loved her every day. That’s the only reason I’m OK right now.

Children of the same family, the same blood, with the same first associations and habits, have some means of enjoyment in their power, which no subsequent connections can supply.

My big brother still thinks he’s a better singer than me.

I can’t work with my brother without laughing.

Now that you have read these sayings and quotes about brothers, we hope that you have gained a little perspective on your own sibling relationships.

As these words remind us, even though our brothers may annoy us at times, they are some of the closest friends we’ll ever make – and a great brother is a wonderful gift.

Say thank you to your brother on National Brother’s Day, which is celebrated each year on May 24th! Though it can seem like there is a day to celebrate every little thing, the bond between siblings is one that is definitely worth celebrating.