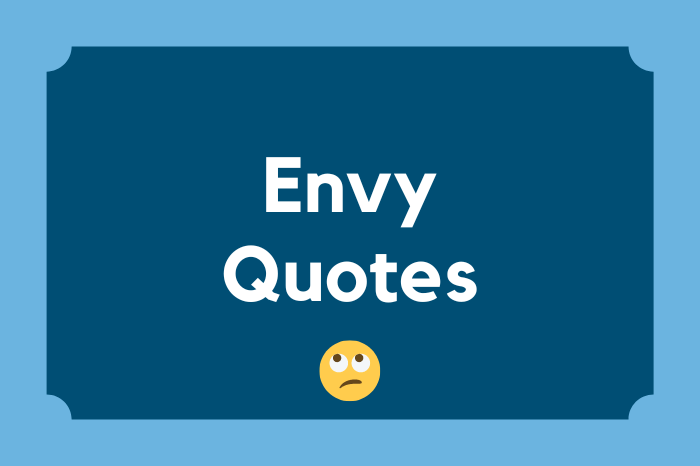 Are you envious of others? These envy quotes show the drawbacks of feeling envious and how to put this feeling behind you.

Envy is the mix of emotions we feel when we’re aware others have things we don’t or can’t have ourselves. It gives way to resentment, bitterness, covetousness, and spitefulness.

These emotions harm the person who feels them, but also degrades relationships between friends, family members, and even different parts of society.

Everyone feels envy from time to time, but some deal with it better than others. We collected the best envy quotes to help you recognize when you feel envious and reach for a better emotion to feel instead.

Our envy always lasts longer than the happiness of those we envy.

Envy is pain at the good fortune of others.

Whoever envies another confesses his superiority.

It is not greed that drives the world, but envy.

Envy is for people who don’t have the self-esteem to be jealous.

Love looks through a telescope; envy, through a microscope.

Envy is like a fly that passes all the body’s sounder parts, and dwells upon the sores.

Envy is more irreconcilable than hatred.

You mostly envy those who have what you desire.

Envy was once considered to be one of the seven deadly sins before it became one of the most admired virtues under its new name, ‘social justice.’

Envy is ever joined with the comparing of a man’s self; and where there is no comparison, no envy.

The price of success is to bear the criticism of envy.

Take heed you harbor not that vice called Envy, lest another’s happiness be your torment, and God’s blessing become your curse.

It is in the character of very few men to honor without envy a friend who has prospered.

Envy blinds men and makes it impossible for them to think clearly.

Fools may our scorn, not envy, raise. For envy is a kind of praise.

Envy is never general, but always very particular – at least envy of the kind one feels strongly.

Envy among other ingredients has a mixture of the love of justice in it. We are more angry at undeserved than at deserved good-fortune.

Envy is the art of counting the other fellow’s blessings instead of your own.

The wicked envy and hate; it is their way of admiring.

It is better to be envied than pitied.

Envy is a sign of insecurity, yes; but so is longing to be envied.

A heart at peace gives life to the body, but envy rots the bones.

Oh, what a bitter thing it is to look into happiness through another man’s eyes.

Our culture is based on envy.

Envy motivates a lot of people.

The few who do are the envy of the many who only watch.

Envy is the central fact of American life.

Envy comes from people’s ignorance of, or lack of belief in, their own gifts.

Negative emotions like loneliness, envy, and guilt have an important role to play in a happy life; they’re big, flashing signs that something needs to change.

Pride, envy, avarice – these are the sparks have set on fire the hearts of all men.

Envy and jealousy are the private parts of the human soul. Perhaps the comparison can be extended.

Men, though they know full well how much women are worth and how great the benefits we bring them, nonetheless seek to destroy us out of envy for our merits.

We experience envy when the quality we feel inferior about threatens our self-concept.

Capitalism is the system that has enabled greatness and made America the envy of the world.

Envy is a littleness of soul, which cannot see beyond a certain point, and if it does not occupy the whole space, feels itself excluded.

Glamour cannot exist without personal social envy being a common and widespread emotion.

Being envious is never a flattering quality, even though it’s a tempting one. Even if it seems unfair or unjust that someone else has something you don’t, that doesn’t mean it’s right for you.

Envy can even make us less happy for what we do have, and less likely to enjoy it.

A lot of people get so hung up on what they can’t have that they don’t think for a second about whether they really want it.

The envious die not once, but as oft as the envied win applause.

The envious person grows lean with the fatness of their neighbor.

There is a natural limit to the success we wish our friends, even when we have spurred them on their way.

When you criticize someone, see if you are doing it out of envy. Your criticism reveals more about yourself than you realize.

Blessed is he who has learned to admire but not envy, to follow but not imitate, to praise but not flatter, and to lead but not manipulate.

The envious die not once, but as oft as the envied win applause.

As iron is eaten away by rust, so the envious are consumed by their own passion.

Don’t be envious. Be inspired.

Take heed you harbor not that vice called Envy, lest another’s happiness be your torment, and God’s blessing become your curse.

Every other sin hath some pleasure annexed to it, or will admit of an excuse: envy alone wants both.

The company of certain people may excite our generosity and sensitivity, while that of others awakens our competitiveness and envy.

Envy lurks at the bottom of the human heart like a viper in its hole.

Only fools live in the past or carry envy to the present.

For most of us, envy is the basis of our actions; remove envy and we feel we are lost. All our effort is towards success, and in that there is envy; behind that envy there is fear.

Pride, which inspires us with so much envy, is sometimes of use toward the moderating of it too.

There is perhaps no phenomenon which contains so much destructive feeling as moral indignation, which permits envy or hate to be acted out under the guise of virtue.

Worth begets in base minds, envy; in great souls, emulation.

There is not a passion so strongly rooted in the human heart as envy.

When you make your mark in the world, watch out for the envious with erasers.

I envy my daughter’s childhood.

I cannot think of any character below the flatterer, except he who envies him.

The affluence of the rich excites the indignation of the poor, who are often both driven by want, and prompted by envy, to invade his possessions.

These envy quotes highlight the many drawbacks of envious thought. The biggest pitfall of envy is that it takes our focus off what we really want and prevents us from thinking better thoughts.

As iron is eaten away by rust, so the envious are consumed by their own passion.

Five enemies of peace inhabit with us – avarice, ambition, envy, anger, and pride; if these were to be banished, we should infallibly enjoy perpetual peace.

If the grass is greener on the other side of the fence, you can bet the water bill is higher.

Now think of the things which goad man into destroying man: they are hope, envy, hatred, fear and contempt.

Envy has the ugliness of a trapped rat that has gnawed its own foot in its effort to escape.

Of the seven deadly sins, only envy is no fun at all.

Envy is ignorance, imitation is suicide.

The poor man is ruined as soon as he begins to ape the rich.

Envy is the coward side of Hate, and all her ways are bleak and desolate.

Envy is thin because it bites but never eats.

I have no respect for the passion of equality, which seems to me merely idealizing envy – I don’t disparage envy, but I don’t accept it as legitimately my master.

It is never wise to seek or wish for another’s misfortune. If malice or envy were tangible and had a shape, it would be the shape of a boomerang.

Envy assails the noblest: the winds howl around the highest peaks.

Probably the greatest harm done by vast wealth is the harm that we of moderate means do ourselves when we let the vices of envy and hatred enter deep into our own natures.

The gifts given to us by God must not be relinquished to those who speak ill of them and who are moved by envy or ignorance.

Frontrunners always attract envy, and a desperate campaign to stop them in their tracks.

Envy, like the worm, never runs but to the fairest fruit; like a cunning bloodhound, it singles out the fattest deer in the flock.

The spirit of envy can destroy; it can never build.

When men are full of envy they disparage everything, whether it be good or bad.

Communism possesses a language which every people can understand – its elements are hunger, envy, and death.

Hatred is active, and envy passive dislike; there is but one step from envy to hate.

If you wish to travel far and fast, travel light. Take off all your envies, jealousies, unforgiveness, selfishness and fears.

Envy and greed starve on a steady diet of thanksgiving.

Let age, not envy, draw wrinkles on thy cheeks.

Let others either envy or pity me; I care not, so long as I enjoy myself.

I avoid envy at all costs.

Whoever cultivates the golden mean avoids both the poverty of a hovel and the envy of a palace.

Find people not to envy but to admire. Do not the profitable but the admirable deed. Live by ideals.

Loyalty will not permit envy, hate, and uncharitableness to creep into our public thinking.

Above all, you must fight conceit, envy, and every kind of ill-feeling in your heart.

It is good to vary in order that you may frustrate the curious, especially those who envy you.

I do not envy any animal, though I envy many of their capacities.

I never envy the guys who get attention for partying too much or behaving badly.

It is smart to occasionally display defects, and admit to harmless vices, in order to deflect envy and appear more approachable.

We are and always will be the party of prosperity, not envy.

The truth is that we should live with less envy and more cordiality and empathy.

I don’t envy or much respect people who are completely politicised.

This only grant me, that my means may lie, too low for envy, for contempt to high.

Don’t envy the harvest of the rich. Envy their planting.

Sometimes we owe a friend to the lucky circumstance that we give him no cause for envy.

Maybe jealousy and envy would fade if we knew the full story behind success. Maybe we would be less likely to put people on a pedestal.

When you show yourself to the world and display your talents, you naturally stir all kinds of resentment, envy, and other manifestations of insecurity… you cannot spend your life worrying about the petty feelings of others.

We hope these envy quotes showed you how destructive envious thoughts are, and how to move past them.

Being envious takes away from our own good and leads to negativity in our own lives, even when it doesn’t seem like it.

When we resent others or covet what they have, our focus is on our own lack. So don’t resent others for their good fortune, and go out and create your own!