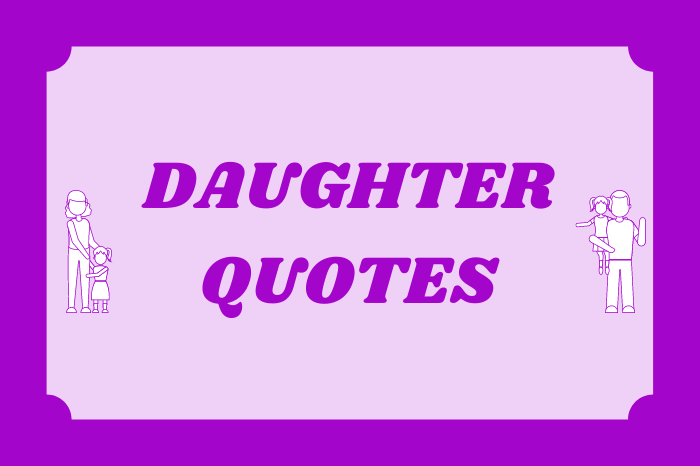 Want to celebrate your relationship with your daughter? Here are the best daughter quotes to help you do it.

Whether you’re a father who loves his little girl, or a mother with a unique bond, having a daughter can be one of the most rewarding experiences in life.

Many new parents even keep their fingers crossed for daughters as their first or second babies! So enjoy these quotes that celebrate daughters and all they are to their parents.

A daughter is one of the best gifts this world has to give.

Every moment I have had with my daughter is precious.

Cathy Shaffer,
Conversations With My Daughter

The best music I have ever heard is the sound of my daughter’s giggling.

I hope that my daughter grows up empowered and doesn’t define herself by the way she looks but by qualities that make her an intelligent, strong and responsible woman.

A daughter is a bundle of firsts that excite and delight, giggles that come from deep inside and are always contagious, everything wonderful and precious and your love for her knows no bounds.

Our daughters are the most precious of our treasures, the dearest possessions of our homes and the objects of our most watchful love.

So, after much observation, I realized that our daughters needed the same things we lacked in our younger years… wisdom. Without wisdom, we continue to blunder through life repeating the same mistakes.

A daughter is a miracle that never ceases to be miraculous… full of beauty and forever beautiful, loving and caring and truly amazing.

Who can describe the transports of a beam truly parental on beholding a daughter shoot up like some fair and modest flower, and acquire, day after day, fresh beauty and growing sweetness, so as to fill every eye with pleasure and every heart with admiration?

There will always be a little girl searching for love, pushing against the outstretched hand of someone who can only love her so much.

I will let my daughter do whatever her heart wants. I will support her and guide her and give her all the knowledge that I have because I want her to succeed in whatever she loves.

What greater aspiration and challenge are there for a mother than the hope of raising a great son or daughter?

We gotta start teaching our daughters to be somebodies instead of somebody’s.

My daughter is my greatest inspiration.

I can encourage my daughter to love her body, but what really matters are the observations she makes about my relationship with my own body.

I was raised by a strong woman, and that DNA is in my daughter and wife.

The happiest moment of my life was probably when my daughter was born.

It’s quite difficult for a parent to know that their daughter is in great danger.

A daughter is chiseled to chisel the world.

There’s no better feeling than making your little girls laugh.

A daughter is a miracle that never ceases to be miraculous…full of beauty and forever beautiful…loving and caring and truly amazing.

My son is my son till he have got him a wife, But my daughter’s my daughter all the days of her life.

My daughter, while we have had adversity, we also have had more sweet memories that allow us to overcome the challenges we faced.

It’s the sweetest thing to be a parent of a daughter. When they hit their twenties, they become these lovebugs that come back. It’s just so sweet.

Do not forget to tell your daughters God made them beautiful.

Daughters are angels sent from above to fill our heart with unending love.

Because my mother couldn’t change my present, I decided to change my daughter’s future.

Daughters are like flowers, they fill the world with beauty, and sometimes attract pests.

One of the greatest things about daughters is how they adored you when they were little; how they rushed into your arms with electric delight and demanded that you watch everything they do and listen to everything they say.

And the moon said to me — my darling daughter, you do not have to be whole in order to shine.

Mothers of daughters are daughters of mothers and have remained so, in circles joined to circles, since time began.

No mother and daughter ever live apart, no matter what the distance between them.

The more a daughter knows the details of her mother’s life, the stronger the daughter.

Of course mothers and daughters with strong personalities might see the world from very different points of view.

A mother’s treasure is her daughter.

A daughter will follow in her mom’s footsteps so make sure to set a good example.

Words are not enough to express the unconditional love that exists between a mother and a daughter.

My daughter is my biggest achievement. She is a little star and my life has changed so much for the better since she came along.

By the time you realize your mother was right, you have a daughter who thinks that you’re wrong.

Her mother would tell her she was beautiful and that everything was all right.

Mother-daughter disagreements were, in hindsight, basically mother stating the truth and daughter taking her own sweet time coming around.

Mother and daughter got on very well indeed, with a deep affection founded on almost complete misunderstanding.

Mothers and daughters together are a powerful force to be reckoned with.

A mother who radiates self-love and self-acceptance actually vaccinates her daughter against low self-esteem.

Mothers of daughters are daughters of mothers and have remained so, in circles joined to circles, since time began.

The mother-daughter relationship is the most complex.

A daughter without her mother is a woman broken. It is a loss that turns to arthritis and settles deep into her bones.

Mothers, look after your daughters, keep them near you, keep their confidence that they may be true and faithful.

To a father growing old nothing is dearer than a daughter.

When I come home, my daughter will run to the door and give me a big hug, and everything that’s happened that day just melts away.

Having a daughter makes you see things in a different way.

It is admirable for a man to take his son fishing, but there is a special place in heaven for the father who takes his daughter shopping.

A man’s daughter is his heart. Just with feet, walking out in the world.

Being a daddy’s girl is like having permanent armor for the rest of your life.

A good father will leave his imprint on his daughter for the rest of her life.

Fathers, be good to your daughters. You are the god and the weight of her world.

When my daughter says ‘Daddy I need you!’ I wonder if she has any idea that I need her billion times more.

You fathers will understand. You have a little girl. She looks up to you. You’re her oracle. You’re her hero. And then the day comes when she gets her first permanent wave and goes to her first real party, and from that day on, you’re in a constant state of panic.

There’s something like a line of gold thread running through a man’s words when he talks to his daughter, and gradually over the years it gets to be long enough for you to pick up in your hands and weave into a cloth that feels like love itself.

Certain is it that there is no kind of affection so purely angelic as of a father to a daughter. In love to our wives there is desire; to our sons, ambition; but to our daughters, there is something which there are no words to express.

Moms should know that even the manliest guys will become softies when they have daughters. Dads immediately fall in love with their little girls and will let them get away with everything. So moms are going to have to be the disciplinarians when it comes to daughters.

Watching your daughter being collected by her date feels like handing over a million-dollar Stradivarius to a gorilla.

Many a man wishes he were strong enough to tear a telephone book in half — especially if he has a teenage daughter.

When daughters have engaged dads, they benefit from that relationship for a lifetime.

She did not stand alone, but what stood behind her, the most potent moral force in her life, was the love of her father.

A daughter needs a dad to be the standard against which she will judge all men.

Fly free, my daughter. Be what I could never be and leave the cage forever.

What I wanted most for my daughter was that she be able to soar confidently in her own sky, wherever that might be, and if there was space for me as well, I would, indeed, have reaped what I had tried to sow.

Never grow a wishbone, daughter, where your backbone ought to be.

If you can give your son or daughter only one gift, let it be – enthusiasm.

You are my angel, you remind me of the goodness in this world and inspire me to be the greatest version of myself.

My highest hope for her is just that she has the fearlessness to always be her authentic self, no matter what she thinks men want her to be.

All I know is that I carried you for nine months. I fed you, I clothed you, I paid for your college education. Friending me on Facebook seems like a small thing to ask in return.

From a little girl so very small, how and when did you get so tall?

Find it within you to love exactly who you are and to know you’re capable, you’re loved and you’re beautiful. The world is a better place, because of you. You are unique because there is only ONE of you.

Strength and dignity are her clothing, and she laughs at the time to come.

You are the woman who came into my life unexpectedly, whose presence kissed my soul.

Be kind to thy father, for when thou were young, who loved thee so fondly as he? He caught the first accents that fell from thy tongue, and joined in thy innocent glee.

Whether you have a daughter, or are one yourself, we hope these daughter quotes leave you celebrating either!