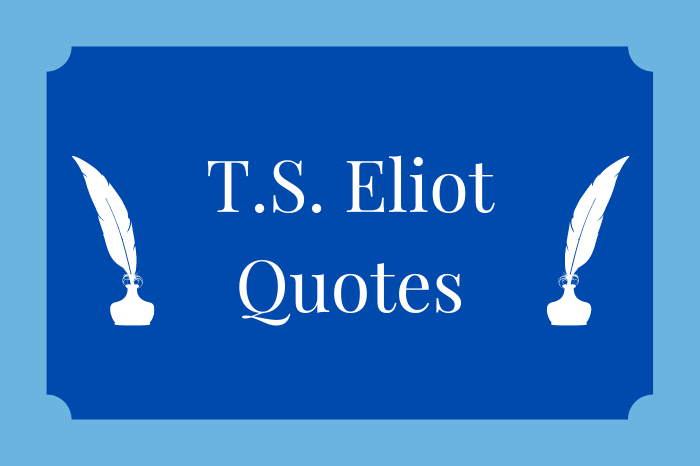 Thomas Stearns Eliot was one of the greatest literary minds of the 20th Century, and these great T.S. Eliot quotes show why.

T.S. Eliot wrote and edited poems, essays, plays, and more during his illustrious career. He was a key figure in English Modernist poetry and earned him the Nobel Prize for Literature for his body of work.

The following T.S. Eliot quotes display the social critique he was renowned for weaving into his writings, and the outlook he displayed in his literary critique.

If you do not push the boundaries, you will never know where they are.

I will show you fear in a handful of dust.

Sometimes things become possible if we want them bad enough.

Everyone gets the experience. Some get the lesson.

Most of the evil in this world is done by people with good intentions.

If you aren’t in over your head, how do you know how tall you are?

The purpose of literature is to turn blood into ink.

Anxiety is the handmaiden of creativity.

Only those who will risk going too far can possibly find out how far one can go.

Finding a way to live the simple life is one of life’s supreme complications.

The most important thing for poets to do is to write as little as possible.

I read, much of the night, and go south in the winter.

The very existence of libraries affords the best evidence that we may yet have hope for the future of man.

Immature poets imitate; mature poets steal; bad poets deface what they take, and good poets make it into something better, or at least something different.”

Poetry may make us from time to time a little more aware of the deeper, unnamed feelings which form the substratum of our being, to which we rarely penetrate; for our lives are mostly a constant evasion of ourselves.

Playwriting gets into your blood and you can’t stop it. At least not until the producers or the public tell you to.

Our high respect for a well read person is praise enough for literature.

No poet, no artist of any art, has his complete meaning alone.

The progress of an artist is a continual self-sacrifice, a continual extinction of personality.

Art serves us best precisely at that point where it can shift our sense of what is possible, when we know more than we knew before, when we feel we have – by some manner of a leap – encountered the truth. That, by the logic of art, is always worth the pain.

A play should give you something to think about. When I see a play and understand it the first time, then I know it can’t be much good.

We know too much, and are convinced of too little. Our literature is a substitute for religion, and so is our religion.

We read many books, because we cannot know enough people.

Any poet, if he is to survive beyond his 25th year, must alter; he must seek new literary influences; he will have different emotions to express.

It is obvious that we can no more explain a passion to a person who has never experienced it than we can explain light to the blind.

Poetry should help, not only to refine the language of the time, but to prevent it from changing too rapidly.

The business of the poet is not to find new emotions, but to use the ordinary ones and, in working them up into poetry, to express feelings which are not in actual emotions at all.

And they write innumerable books; being too vain and distracted for silence: seeking every one after his own elevation, and dodging his emptiness.

If you haven’t the strength to impose your own terms upon life, then you must accept the terms it offers you.

What we call the beginning is often the end. And to make an end is to make a beginning. The end is where we start from.

Love is most nearly itself When here and now cease to matter.

It will do you no harm to find yourself ridiculous. Resign yourself to be the fool you are… …We must always take risks. That is our destiny.

I learn a great deal by merely observing you, and letting you talk as long as you please, and taking note of what you do not say.

Success is relative. It is what we make of the mess we have made of things.

There is one who remembers the way to your door: Life you may evade, but Death you shall not.

A people without history is not redeemed from time, for history is a pattern of timeless moments.

We shall not cease from exploration, and the end of all our exploring will be to arrive where we started and know the place for the first time.

The tendency of liberals is to create bodies of men and women-of all classes-detached from tradition, alienated from religion, and susceptible to mass suggestion-mob rule. And a mob will be no less a mob if it is well fed, well clothed, well housed, and well disciplined.

Half of the harm that is done in this world is due to people who want to feel important. They don’t mean to do harm. But the harm does not interest them.

To do the useful thing, to say the courageous thing, to contemplate the beautiful thing: that is enough for one man’s life.

If we really want to pray we must first learn to listen, for in the silence of the heart God speaks.

Humility is the most difficult of all virtues to achieve; nothing dies harder than the desire to think well of self.

An election is coming. Universal peace is declared and the foxes have a sincere interest in prolonging the lives of the poultry.

People exercise an unconscious selection in being influenced.

In a world of fugitives, the person taking the opposite direction will appear to run away.

No one can become really educated without having pursued some study in which he took no interest – for it is a part of education to learn to interest ourselves in subjects for which we have no aptitude.

Those who say they give the public what it wants begin by underestimating public taste and end by debauching it.

He had a mind so fine that no idea could violate it.

For us, there is only the trying. The rest is not our business.

The last act is the greatest treason. To do the right deed for the wrong reason.

It’s not wise to violate the rules until you know how to observe them.

People to whom nothing has ever happened cannot understand the unimportance of events.

And indeed there will be time to wonder, ‘Do I dare?’, and ‘Do I dare?

O Lord, deliver me from the man of excellent intention and impure heart: for the heart is deceitful above all things, and desperately wicked.

Wait without thought, for you are not ready for thought.

We don’t actually fear death, we fear that no one will notice our absence, that we will disappear without a trace.

Do I dare disturb the universe? In a minute there is time for decisions and revisions which a minute will reverse.

To do the useful thing, to say the courageous thing, to contemplate the beautiful thing: that is enough for one man’s life.

This is the way the world ends – not with a bang but a whimper.

We shall not cease from exploration and the end of all our exploring will be to arrive where we started and know the place for the first time.

April is the cruelest month, breeding lilacs out of the dead land, mixing memory and desire, stirring dull roots with spring rain.

Between the idea and the reality between the motion and the act, falls the shadow

Time for you and time for me, And time yet for a hundred indecisions, And for a hundred visions and revisions, Before the taking of a toast and tea.

Where does one go from a world of insanity? Somewhere on the other side of despair.

Men dislike being awakened from their death in life.

Every experience is a paradox in that it means to be absolute, and yet is relative; in that it somehow always goes beyond itself and yet never escapes itself.

Time past and time future what might have been and what has been point to one end, which is always present.

It is only in the world of objects that we have time and space and selves.

We hope these T.S. Eliot quotes inspire you to see things a little differently.

Whether they change your view of literature, the world, or even yourself, they offer inspiration for all. Go out and live your own poetry or read some more of his today!