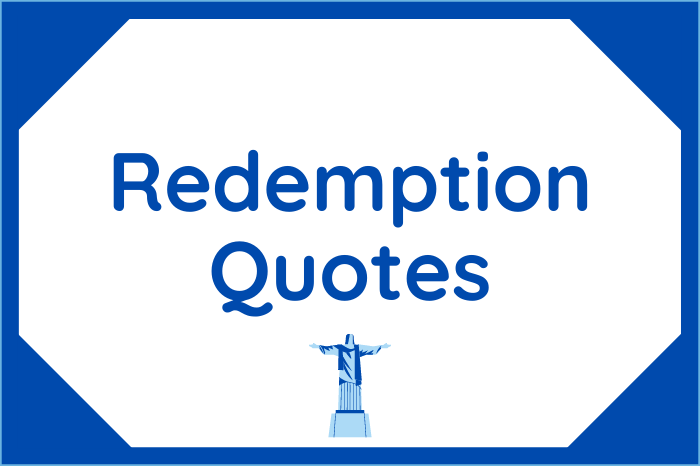 Have you gone astray? Check out these redemption quotes to get you reoriented and back on a level path.

Redemption is a key part of life, religion, and spirituality. It’s also a common theme in books, movies, and art.

Though redemption generally means the clearing of a debt or regaining what is lost, its spiritual meaning is much more important. Christianity teaches redemption of the soul is achieved only through Christ, and after repentance, thus clearing the debts of sin.

However you look at redemption, and however much you need, we hope these redemption quotes help you to seek it and provide faith that you deserve to be redeemed.

Redemption is possible, and it is the measure of a civilized society.

Redemption can be found in hell itself if that’s where you happen to be.

The idea of redemption is always good news, even if it means sacrifice or some difficult times.

God answers prayer on the ground of Redemption and on no other ground.

Redemption is a magnificent thing… the life of God in the soul of man.

You, Lord, took up my case; you redeemed my life.

We can be redeemed only to the extent to which we see ourselves.

Your current circumstances are part of your redemption story He is writing.

People find meaning and redemption in the most unusual human connections.

Redemption is not perfection. The redeemed must realize their imperfections.

True redemption is seized when you accept the future consequences for your past mistakes.

People, even more than things, have to be restored, renewed, revived, reclaimed, and redeemed; never throw out anyone.

A good act does not wash out the bad, nor a bad act the good. Each should have its own reward.

No man can walk so long in the shadow that he cannot come again to the light.

The only thing that will redeem mankind is cooperation.

True love does have the power to redeem but only if we are ready for redemption.

Understanding and tenderness would arise among us no matter how bad things got, and we found redemption in the very places we hurt most.

The recognition of pain and fear in others give rise in us to pity, and in our pity is our humanity, our redemption.

I know that my Redeemer lives, And ever prays for me; I know eternal life He gives, From sin and sorrow free.

The problem of restoring to the world original and eternal beauty is solved by redemption of the soul.

Redemption is something you have to fight for in a very personal, down-dirty way.

At some point you will meet my imperfections. Will you leave or will you stay for my redemption?

It is his capacity for self-improvement and self-redemption which most distinguishes man from the mere brute.

I don’t believe the world’s a particularly beautiful place, but I do believe in redemption.

I guess darkness serves a purpose: to show us that there is redemption through chaos.

We seek redemption, yet, we don’t seek forgiveness.

Hell is yourself and the only redemption is when a person puts himself aside to feel deeply for another person.

And while some healing does happen, it isn’t a healing of redemption or epiphany. It’s more like the slow absorption of a bruise.

Redemption just means you just make a change in your life and you try to do right, versus what you were doing, which was wrong.

Seeking to forget makes exile all the longer; the secret of redemption lies in remembrance.

I believe redemption is something you can strive for but never fully achieve.

Redemption is invented by the sinner.

Redemption comes to those who wait, forgiveness is the key.

I think Hollywood, I think America in general, they love redemption stories.

Sometimes acknowledging your erroneous ways is the first step to redemption.

Everything which is done in the present, affects the future by consequence, and the past by redemption.

Any fool can be happy. It takes a man with real heart to make beauty out of the stuff that makes us weep.

Language is conceived in sin and science is its redemption.

Redemption is promised at the low price of surrender of your critical faculties.

It may be – I hope it is – redemption to guess and perhaps perceive that the universe, the hell which we see for all its beauty, vastness, majesty, is only part of a whole which is quite unimaginable.

At the cross, God wrapped his heart in flesh and blood and let it be nailed to the cross for our redemption.

I have never known anyone to accept Christ’s redemption and later regret it.

God’s holiness demands that sin be punished – but God’s love has provided the way of redemption through Christ.

The power that is to redeem him must be a power working within, not without.

The best way to use the gold of the Redeemer is for the redemption of those in peril.

To be in Christ – that is redemption; but for Christ to be in you – that is sanctification!

At the cross God wrapped his heart in flesh and blood and let it be nailed to the cross for our redemption.

The doctrine of Redemption is the fundamental mystery of our holy religions, and whoso believeth in it shall not perish, but have everlasting life in which to try to understand it.

The whole structure of man and of the world, is moulded to be the theatre of the redemption of the sinner. Not in Eden, but there on Calvary, and in Heaven, which is the child of Calvary, we see realized the whole idea of God.

The greatest comfort in life is Christ on the move for our redemption timelessly!

Whom man kills God restores to life; whom the brothers pursue the Father redeems.

I wish I would have known this sooner. I wish I could have seen the entire redemptive, narrative arc of the Bible.

It is to the Cross that the Christian is challenged to follow his Master: no path of redemption can make a detour around it.

If man had his way, the plan of redemption would be an endless and bloody conflict. In reality, salvation was bought not by Jesus’ fist, but by His nail-pierced hands; not by muscle but by love; not by vengeance but by forgiveness; not by force but by sacrifice. Jesus Christ our Lord surrendered in order that He might win; He destroyed His enemies by dying for them and conquered death by allowing death to conquer Him.

God is the ultimate musician. His music transforms your life. The notes of redemption rearrange your heart and restore your life. His songs of forgiveness, grace, reconciliation, truth, hope, sovereignty, and love give you back your humanity and restore your identity.

Redemption is the consummation of love; other gifts are only as mites from the Divine Treasury; but redemption opens all the stores of indulgence and grace.

Between the radiant white of a clear conscience and the coal black of a conscience sullied by sin lie many shades of gray – where most of us live our lives. Not perfect but not beyond redemption.

When it comes to God, We can’t run out of second chances… only time.

Jesus Christ is both the only price and sacrifice by which eternal redemption is obtained for believers.

The gospel comprises indeed, and unfolds, the whole mystery of man’s redemption, as far forth as it is necessary to be known for our salvation.

God undertook the most dramatic rescue operation in cosmic history. He determined to save the human race from self-destruction, and He sent His Son Jesus Christ to salvage and redeem them. The work of man’s redemption was accomplished at the cross.

God creates out of nothing. Wonderful you say. Yes, to be sure, but he does what is still more wonderful: he makes saints out of sinners.

I know that my Redeemer lives, And ever prays for me; I know eternal life He gives, From sin and sorrow free.

All of my favorite hymns are admissions of faults, and finding redemption even in those.

The cost of redemption cannot be overstated. The wonders of grace cannot be overemphasized. Christ took the hell He didn’t deserve so we could have the heaven we don’t deserve.

In him we have redemption through his blood, the forgiveness of our trespasses, according to the riches of his grace,

I have blotted out your transgressions like a cloud and your sins like mist; return to me, for I have redeemed you.

He sent redemption to his people; he has commanded his covenant forever. Holy and awesome is his name!

Let the redeemed of the LORD say so, whom he hath redeemed from the hand of the adversary;

Repent, then, and turn to God, so that your sins may be wiped out, that times of refreshing may come from the Lord,

It is because of him that you are in Christ Jesus, who has become for us wisdom from God—that is, our righteousness, holiness, and redemption.

Who gave himself for us, that he might redeem us from all iniquity, and purify unto himself a peculiar people, zealous of good works.

And the king swore, saying, “As the LORD lives, who has redeemed my soul out of every adversity,

We hope these redemption quotes have you in a better place with a desire to be redeemed.

May you be delivered from your troubles and rescued from them when you need it most. Never forget that redemption is real and often a necessary part of your life and spiritual journey.

It’s never too late to understand redemption and seek it for yourself however you feel led to do so.