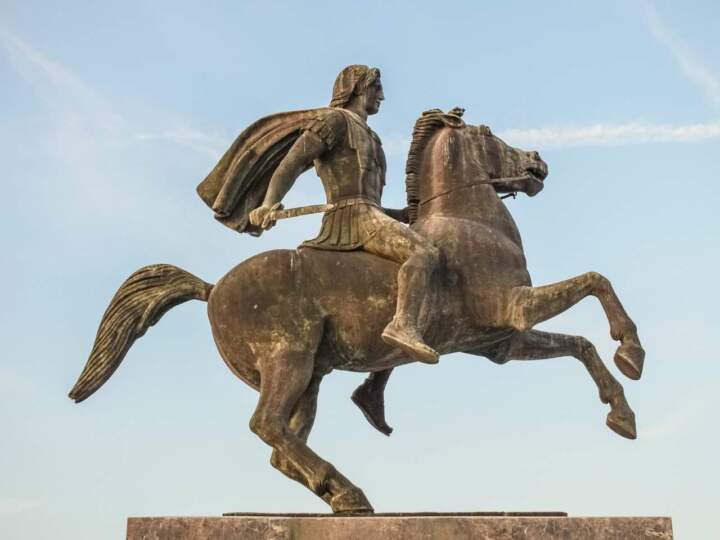 These Alexander the Great quotes will have you ready to conquer anything.

Alexander the Great was king of the ancient Greek kingdom of Macedon, born 356BC. He became king at just 20 years old, and by the age of 30 had created one of the largest empires in the ancient world.

Undefeated in battle, he is widely considered one of history’s most successful military figures, and military academies continue to teach his tactics.

Far from a distant classical hero, Alexander the Great remains an influential and popular figure. There are many books and movies about his life, and many cities he conquered still bear his name.

We hope these Alexander the Great quotes inspire you to greatness, and give you an insight into the extraordinarily successful mindset of this legendary historical figure.

I would rather live a short life of glory than a long one of obscurity.

The end and object of conquest is to avoid doing the same thing as the conquered.

Bury my body and don’t build any monument. Keep my hands out so the people know the one who won the world had nothing in hand when he died.

Without knowledge, skill cannot be focused. Without skill, strength cannot be brought to bear; and without strength, knowledge may not be applied.

I had rather excel others in the knowledge of what is excellent, than in the extent of my power and dominion.

For my own part, I would rather excel knowledge of the highest secrets of philosophy than in arms.

When we give someone our time, we actually give a portion of our life that we will never take back.

Glory crowns the deeds of those who expose themselves to toils and dangers.

You shall, I question not, find a way to the top if you diligently seek for it; for nature hath placed nothing so high that is out of the reach of industry and valor.

Are there no more worlds that I might conquer?

I do not steal victory.

Let us conduct ourselves so that all men wish to be our friends and all fear to be our enemies.

Toil and risk are the price of glory, but it is a lovely thing to live with courage and die leaving an everlasting fame.

True love never has a happy ending, because there is no ending to true love.

Sex and sleep alone make me conscious that I am mortal.

Whatever possession we gain by our sword cannot be sure or lasting, but the love gained by kindness and moderation is certain and durable.

There is something noble in hearing myself ill-spoken of when I am doing well.

Consider the world as your country, with laws common to all and where the best will govern irrespective of tribe. I do not distinguish among men, as the narrow-minded do, both among Greeks and Barbarians. I am not interested in the descendance of the citizens or their racial origins. I classify them using one criterion: their virtue.

In the end, when it’s over, all that matters is what you’ve done.

A tomb now suffices him for whom the world was not enough.

We hope you enjoyed these quotes from the classical master of strategy, Alexander the Great!