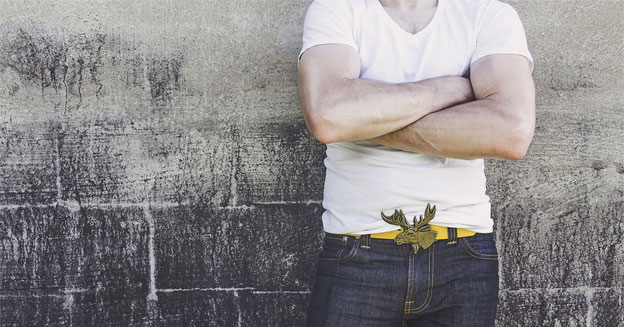 Turns out, this form of language isn’t the only way we communicate with each other. Our bodies move and sway in sync with our words, and continue to speak even when we stay quiet.

How The Body Speaks

We use our bodies intentionally when we do things like shrug our shoulders, clap our hands, shake our heads, or roll our eyes. Other times, our bodies go behind our backs to reveal our moods or thoughts without our awareness, such as when we unknowingly point our feet in one direction, make our bodies take up less space, or touch our neck and face.

David Lambert points out three key purposes to body language: As a conscious replacement for speech, such as when we wink or give the thumbs up; to reinforce speech, as in when we use hand gestures to help articulate a point we’re making orally; and as a reflection of mood, such as our expressions, body pointing, and dilated pupils.

Body language was likely the means by which we communicated in the ages before the human capacity for language even evolved. British zoologist Desmond Morris suggested in 1969 that we owe our nonverbal communication to our animal nature.

It’s not only humans and apes, other animals from lizards to birds and dogs all puff up their chests when they want to establish dominance. We know a dog feels guilty when he lowers his head, but we also know that we too can give those puppy dog looks.

Both us and different animals dance to attract mates, and shrink down when we’re rejected or defeated.

Our bodies appear to be powerful, universally expressive tools that say much more than we realize, both when we want them to and when we’re oblivious to it.

Something strange has come to light in the last few decades — the idea that our bodies are not only expressing our minds, but that the body can directly influence the mind in its own way. This is a two-way street.

There is an emerging field in psychology known as embodied cognition, whose main premise is that our bodies and the world around us don’t only influence us, but are intimately woven within our thoughts. Our experiences are part of our thinking.

Studies within this field have brought us some incredible findings — Sitting in a hard chair makes people less willing to compromise than if they were in a soft chair; holding a heavy clipboard caused people to take their jobs more seriously; holding a warm drink made people judge another as more generous and caring than those holding cold drinks.

It’s putting a new spin on what we make of our minds. The typical idea that our consciousness sits inside our brains and observes the world, controlling the body to do its deeds, is only half the story.

Much of our body language happens without our awareness, we just go along with it. But, if we look at this idea of embodied cognition, we might find that by becoming aware and using the mind’s power to volitionally choose our form and motion, we can purposefully alter our minds and moods. Let’s explore the possibilities.

You’ve probably been told to sit up straight a few times in your life, turns out there’s a good reason to follow that advice. Sitting or standing with a slouch can lead to abnormal spine alignment, which can affect our overall health and leave us with problems for the rest of our lives.

There are short-term effects too. Positioning your body with a slouch can cause you to feel sad and depleted of energy, as a study from San Francisco State University found. They also discovered that changing your posture to an upright position can cause an improvement in mood and energy.

Folding the arms is a defense mechanism, used to protect our heart and lungs. We often resort to it when we feel nervous, insecure, or negative towards something or someone. Monkeys have also been observed making the same gesture in similar threatening situations.

Crossing our arms has shown to make people more persistent, and willing to work longer on difficult problems even when we feel like quitting.

We might not want that strong attitude when dealing with other people, however, as the physical barrier it represents could not only give the impression that you’re not open to the other person’s opinion, but you might literally become less open to them.

When we see a smile, our brains create the same pattern of activity that it would do if we smiled, and in doing so, we feel the same emotions that accompany a smile — It’s the same idea behind those contagious yawns.

The good news is you don’t need to see someone else smiling, you can just do it yourself. Doing this can pick you up out of a negative mood and lower your stress levels, while sticking with furrowed eyebrows and negative expressions causes you to see the world in a more cynical light.

This often happens unconsciously through those mirror neurons, but the effect remains if we do it intentionally. Mirroring has been shown to help create rapport with others, to help people solve disagreements with more ease, and can also foster empathy.

Like the animals that puff up their chests to establish dominance, taking up space is a powerful display. Those that take up more space are associated with ratings of confidence, self-assurance, and a generally of a higher social class.

The power pose, in which we take up space through a posture of confidence, alters our levels of testosterone and cortisol.

Practicing a simple pose for 2 – 3 minutes a day has been shown to increase our feelings of power by boosting testosterone as much as 20%, while those that feel defeated through low-power poses suffer a decrease.

There’s a power to eye contact, staring into another’s eyes creates arousal — good or bad depending on circumstances. It also makes you better at interpreting fake from real smiles, and could give away your lies.

A study conducted in 1989 found that if two acquainted people gazed into each other’s eyes for two minutes, that was enough to create higher feelings of affection and passion. Another study found that under the gaze of anthers eye contact, we become more self-aware.

Making Use Of The Loop

Body language has been around for longer than we have, and it’s a remarkably universal function. That being said, not everything we say with our bodies occurs between everyone.

We should all be aware that different hand gestures can mean one thing where you live, and something entirely different to another culture. There are also some striking differences between both men and women, particularly when one is trying to attract the other.

Even with the differences, we give away a great deal of information about our inner thoughts and feelings through our bodies, and we also interpret a great deal from the body language of others.

This language, like that of spoken language, is not only between people. We speak to ourselves all the time, and so do our bodies. They help shape our experiences, moods, and thoughts through embodied cognition.

It would appear that the way we feel emotions isn’t just restricted to our brain—there are parts of our bodies that help and reinforce the feelings we’re having, It’s like a feedback loop.

This behavioral and cognitive loop defines much of what we do. The actions and expressions we engage in alter our thoughts, and these thoughts then create emotions that affect our bodies.

By learning to hack this loop we can design the best thoughts and emotions for the situation, not to mention portray the right body language to those around us. How does your body language differ from the words you say? And how might it be affecting your thoughts?